Lots is the answer to this question! First off there were two major changes in a: Enhanced Campaigns and b: the way in which Ad Rank was calculated. There was also the usual myriad of Google enhancements including:

But for this post I want to concentrate on the main two changes and the impact they have caused across our client set.

Enhanced Campaigns were announced by Google back in February. Google believe that the line between Desktop and Tablet computers is becoming more blurred and therefore have removed the ability to target them as separate devices. Also, Google introduced a mobile bid multiplier option, meaning that gone are the days of three separate campaigns, one for each device.  Desktop and Tablets are being treated the same and you can now control your mobile traffic from the same campaign. So what does this mean? Well it means for starters that any advertisers who were opted out of Tablet are now opted back in as of Google’s forced migration date of July 22nd. 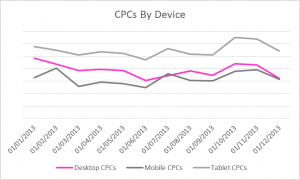 The graph above shows CPCs by device across our client set for 2013. Both Mobile and Tablet CPCs spike in July as advertisers are forced into migration. The spike in Tablet CPCs will be due to increased competition as advertisers who were opted out of this device are now opted in. The spike in Mobile is a little different as it is still possible to opt out (setting bid multipliers to -100% will do this). This must be as advertisers are forced to enhance they have not correctly adjusted their Mobile bids and are bidding the same as they would on Desktop, forcing the ‘market’ price per click up. Mobile has seen an increase in Clicks across the year while we are seeing a downward trend in both Desktop and Tablet Clicks. 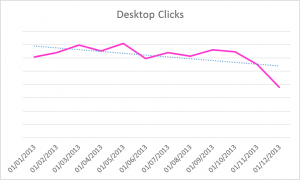 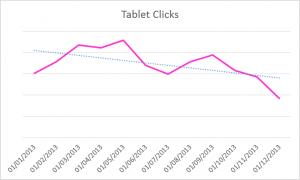 This highlights the trend of growth in Mobile searches and the importance of having a Mobile optimised site. The decline in Tablet traffic interested me, so I delved further into this. I wanted to see whether this could be attributed to a drop in CTR due to the increased competition brought about by Enhanced Campaigns, or whether there was a general decline in Impressions from devices deemed to be a Tablet. What I found was it was actually a combination of the two. 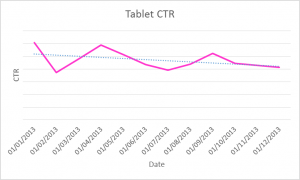 As you can see from the above graph, Tablet CTR dips in July when the forced migration takes place, recovers slightly in September, then starts trailing off towards the end of the year. Couple this with the below graph which shows Impressions via this device format in a state of decline since February and it is easy to see why traffic volumes are declining. 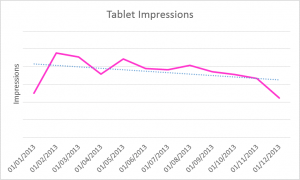 In conclusion it seems Google may be right in treating Tablet and Desktop as one and the same, from our client data set they seem to be following the same trend from a traffic point of view.

In October Google announced that the way Ad Rank is calculated was changed, Ad Rank was traditionally, your Max CPC multiplied by your Quality Score. The change that Google implemented brings a third component into the Ad Rank formula – expected impact from Ad Extensions and formats.

This excellent column from Larry Kim on Searchengineland.com explains how by rewarding ad rank for extensions can actually increase CPCs across the board (your actual CPC is your competitors ad rank divided by your Quality Score plus a penny).

The above graph is the CPCs of Soap Media’s client set across all devices, as you can see there is a spike in October when this new change came into play. As we have extensions across our client set, we are not being penalised in terms of Ad Rank, so therefore the increased Ad Rank of our competition must be forcing this up. In Conclusion, the two big changes which have been introduced seem to be working in Google’s favour in that we have seen CPCs increase on the back of them. These, of course, aren’t the only impacts of Enhanced Campaigns and Ad Rank changes, some of the features of Enhanced Campaigns are really useful and we’ll be looking to get some blogs out on how we’ve gone about using them for our client set in the future, but for this post we wanted to focus purely on the traffic and cost implications of the changes. What has been your experience with the above? Have you seen similar trends? Comments, questions to [email protected] or below.