After working closely with Think Ahead Stroke Charity on redesigning their brand, logo and website, the Soap Media team took part in their annual Dragon Boat Race in order to raise money to support stroke survivors, their carers and their families.

The event was held on the 05/09/2014 with a total of 8 teams taking part, each race consisted of 2 teams and each team had 3 races to compete in. The aim of these races was not only to beat your competitor but to also improve your finishing time after each race, showing how you’ve progressed working together as a team. 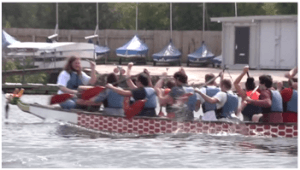 After much debate our team name of The Soapreme XI was finally decided and although we didn’t quite live up to the expectations of our name, 5th place was impressive for our first try. For The Soapreme XI and the rest of the teams taking part, the races were never really about winning but about taking part in raising awareness as well as money for such an incredible charity (although we did have a lot of fun).

The focus of the event was one that represented the Think Ahead Charity, teamwork. Without teamwork our dragon boats wouldn’t have gone far, and without teamwork the Think Ahead Charity wouldn’t be half the success they are today. After a stroke many survivors isolate themselves and their confidence drops dramatically, but through the help of Think Ahead they are able to share their stories with other stroke survivors overcoming the isolation and rebuild their confidence through trips out and holidays.

Soap Media would like to thank Mike Aspinall and the rest of the Think Ahead team for working with us, you’ve inspired us all and really brought the Soap team together through something we’ve never tried before.

Please donate to Think Ahead to help the other stroke survivors, their carers and their families who they have not yet been able to reach